What is Caster Load? 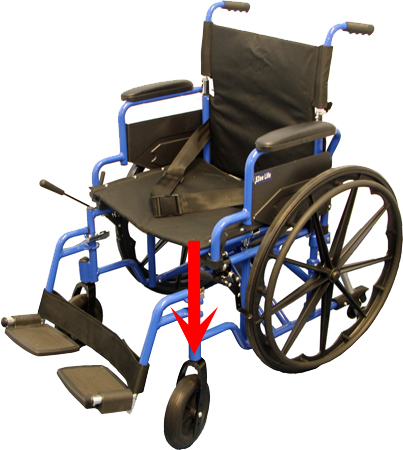 Caster load is the weight carried by the casters on both manual and electric wheelchairs. In order that wheelchairs can make turns, the casters need to be able to swivel. In order for them to swivel, the casters are limited in size. The smaller the caster wheel the harder it is for it to roll with weight on it.

If a 200 pound person sits in a wheelchair, their weight, and that of the wheelchair itself, and anything they might be carrying with them, is transmitted through the wheels. Depending on the center of gravity for the wheelchair that weight will be dispersed between the front casters and the rear wheels. This weight going through the casters is called the caster load.

The higher the weight load on the casters, the harder it will be to propel the wheelchair and make turns. The harder the caster tires and harder the floor surface the easier it will be to propel and steer the wheelchair. Indoors, terrazzo or concrete floors are easiest, high pile carpets will be worst. Outdoors, pavement/concrete will be easiest, sand, soft sand the worst.

For an example of this imagine pushing a wheelchair through soft sand on a beach or over a soft lawn. The casters will dig into the soft surface and the chair will be hard, if not impossible to push. The more weight on the casters, the worse the effect of soft surfaces will be on propulsion. This "soft ground effect" happens on all degrees of softness/hardness of terrain to some degree but for users who have very limited arm strength even a little resistance can make the chair impossible to propel independently.

As with soft surface, soft tires will have a negative effect on propulsion under high caster loads. Soft tires have a larger "footprint" on the floor and will make propulsion more difficult. Push a heavy wheelbarrow with a soft tire versus one with a hard tire for an example.

I had a business associate who suffered from paraplegia and lived on a farm who used a rigid wheelchair with micro casters. He told me one day that he could go anywhere on the farm he needed to go in his wheelchair because his chair was set up with almost no weight on the casters. He had good upper body strength and was, other than the paraplegia, was healthy but if he had a off the shelf basic wheelchair with standard caster loads he would have never been able to go off solid surfaces.

Exactly the same as manual wheelchairs. High caster loads will make the chair harder to propel and harder to steer. The effect as not as noticeable because the user is not physically trying to move the chair but all this still applies. One effect of high caster loads on electric wheelchairs is the batteries will run down quicker and require charging more often. 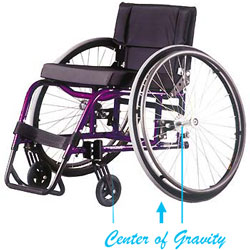 On the higher priced wheelchairs the rear axle plate allows for adjustment forward and back of the rear wheel placement. This adjust ability moves the center of gravity backward and forward as needed to balance the weight at its most advantageous position.

Casters wheels are available in a variety of sizes from 3" micro-casters to 8" standard casters with even lager casters available for wheelchairs designed for rough terrain. Choosing the right caster size is often a compromise based on the weight of the user, the type of wheelchair, the terrain the wheelchair will be most often used on and the user's ability to propel the wheelchair. 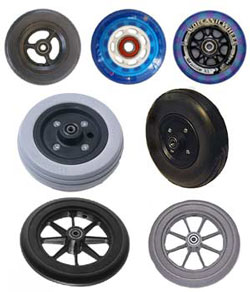 Casters generally come with solid tires but spongier foam filled tires and air filled tires are available. Unless there is a specific reason for softer casters I always recommend people choose solid casters. Air tires are used for people who need a softer ride and can't tolerate the bumping that they will feel on sidewalk cracks and similar surfaces with ridges or bumps. The harder the tire, the easier it will roll and swivel with weight on it. Foam filled tires will give a softer ride than solid tires but won;t get soft or get flats like air tires. If the user has low strength levels even these foam filled tires made be too soft for efficient propulsion.

Caster rims don't make a lot of difference for performance or affect caster loading but casters with stronger rims will be less prone to breakage if the caster load is high or the user is very active.

What Can be Done to Lessen the Effects of Caster Load?