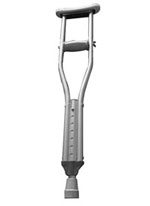 Crutches are designed to be used in pairs and are a option for people who don't need or want to use a walker but can't use a canes. More often than not, crutches are used for short term or specific uses but there are some who will use crutches on a daily basis.

The most common crutches are adjustable height wooden models with adjustable hand holds. These are often sold at hospitals and clinics for people who suffer breaks or sprains of the legs, knees, ankles, feet etc. They are inexpensive and adjustable enough to be set up to fit almost every user. For very tall or short people wooden crutches are manufactured in short or tall versions also.

Ice tips can be added to crutches for use in icy conditions but caution should be used as much more weight is put on crutches than on a cane.

Conventional crutches are also available in aluminium but I know of no discernible advantage to aluminium over wood although they may be a little bit lighter in weight.

There is a knack to using crutches that takes some practice to master. The company or organization who sell you your crutches should take some time to explain the use of them and some instruction from a health care professional would be in the best interest of the user.