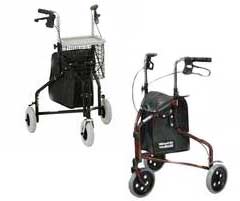 Three wheeled walkers are basically rollators with three wheels instead of the usual four. Instances where this might be an advantage are when the user frequently walks around areas with tight spaces. The three wheeled walkers tend to be easier to manoeuvre in small areas but can be a little less stable than the four wheeled models.

My issue with the three wheeled walkers is, if they hit an obstruction with the front wheel the chances of them flipping forward, either to the right or left, can be greater than the four wheeled walkers. This shouldn't be a big issue if the user is aware of this and physically has the balance and ability to deal with this unlikely, but possible, event.

As with any other walker style, I feel the user should actually try the walker, or have previous experience with the style, they are purchasing for safety.

Setting the proper height for a walker is important for the comfort, safety and posture of the user. Generally the top of the walker's hand grips should be at the same height as the user's wrist where it meets the hand when the user is standing as upright as they can. The important thing is there should be a small bend in the user's elbow when using the walker.

How to Use a Three Wheeled Walker

Using the three wheel walker is pretty straight forward. The user has the walker in front of them, steps into it from the rear and pushes it forward at the same time. The pace is fairly conventional for walking instead of the stop and go pace of a standard walker without wheels. Because the front wheel will swivel, the walker should never have to be picked up by the user while in use.

The user can operate the brakes while walking to slow down and stop or can lock them in the on position to prevent the walker from accidentally rolling away.

The walker is not intended to take all of the weight of he user but some weight can be transferred onto the handles when walking forward and providing balance if needed.

Some people have trouble with three wheeled walkers, especially the lighter models, because they can get away from people when they are using them. People with forward balance issues sometimes can have trouble because they push the walker too far forward, too fast and can't catch up with it. The faster they try and walk to catch up with the walker, the faster and farther away the walker goes. Traveling down ramps and hills may aggravate this behaviour.

There are only a couple of accessories available for these three wheeled walkers. 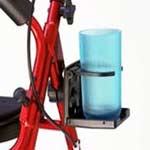 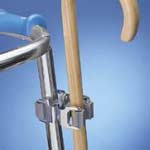