Medical oxygen is considered a drug and is prescribed just like a drug by physicians who feel their patients will benefit from oxygen use at home. There are many people who require oxygen on a daily basis and many of these people require oxygen 24/7. Where as many years ago these people would have been confined to a hospital, today home oxygen systems allow people to remain in their homes and receive the treatments they need.

The use of medical oxygen in the home requires the use of fairly expensive oxygen systems to contain the oxygen properly to prevent its evaporation and provide for the safety of the user and others. These home oxygen systems are almost never purchased and the use of them is included in the cost of the oxygen. Home oxygen is usually paid for by one branch of the government or another and I've never known anyone to have had to pay for their oxygen use.

Below are four common types of home oxygen systems in use today and a brief overview of each: 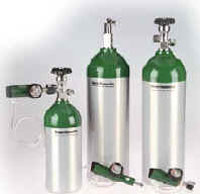 High pressure oxygen systems consist of either aluminum or steel cylinders that hold medical grade oxygen in a gaseous form at a pressure of about 2,000 psi when full. As the oxygen is used, the pressure drops until the tank is empty and the pressure reads zero on the regulator. Regardless of the size of the cylinder, it will always be full at 2,000 psi and empty at 0 psi however the pressure readings are just an indicator of how much of the tank has been used, not how much oxygen has been used. A tank the has 1,000 litres of oxygen gas at 2,000 psi will only have 500 litres at 1,000 psi and a tank the holds 500 litres at 2,00 psi will only have 250 litres at 1,000 psi.

An oxygen regulator is attached to the tank and this regulator will show the pressure in the tank and allow the user to adjust the rate of oxygen flow when in use. Users usually only have one regulator that they switch from tank to tank as they go empty.

One advantage of the high pressure oxygen cylinder is it won't go empty when it isn't being used. A full tank today, will be full in a month or even a year if it isn't used and turned off securely.

The big problem with these cylinders is the don't last very long when in use and can't be refilled by the user. There are oxygen conserver regulators to make these tanks last two or three times longer between refills but they still don't last terribly long. An "E" Size cylinder holds about 660 litres of gas. At a prescribed rate of 3 litres per minute, the tank will last about 220 minutes (3½ hrs) with a standard regulator. A person on 3 lpm for 12 hrs a day would go through 4 cylinders per day. 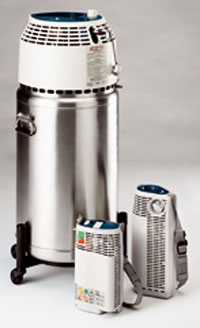 Liquid Oxygen tanks are the next step up in home oxygen systems from high pressure gas cylinders. Liquid home oxygen is gaseous oxygen that has been cooled and compressed until it becomes a liquid. In order for it to remain a liquid, the oxygen must remain cold and this is the function of the liquid oxygen cannister found in homes. So basically, the liquid oxygen tank is a large thermos. The top part of the tanks consist of a long coil of metal tubing that the oxygen flows through to reach the tank regulator. The purpose of this coil is to warm the gas coming off the liquid in the tank in preparation for its use.

Liquid oxygen tanks are under pressure although they do not have anywhere near the same amount of pressure as the gas cylinders. The pressure is created by the liquid oxygen warming up and turning to a gas. Because this gas can't escape pressure is built up in the tank. If the pressure gets too high, there is a safety relief valve that opens and lets out the excess pressure and then closes again.

Liquid oxygen tanks have a gauge built in to show the level of oxygen left in the tank however, unlike the oxygen cylinders, the gauges show the volume of liquid in the tank instead of the pressure in the tank.

liquid oxygen tanks must be refilled on a regular basis by technicians from your oxygen supply company. They will usually fill the tanks in the back of their trucks right at your home from even larger tanks they carry with them or replace the used tank with a new filled tank. The frequency of refills is dependent on the amount of oxygen used by the user but weekly or bi-weekly refills are common for regular users.

There are two real benefits to using liquid oxygen. The first is, the user can fill a portable tank themselves for trips away from home enabling them to leave whenever they like. The second is, the liquid oxygen lasts a really long time as compared to the gas cylinders. In the cylinder section above a prescription of 3 litres per minute would take about 3½ hours to deplete but the large liquid tank would take about 190 hours to empty. A small home liquid tank would last about 95 hours. Of course, filling a portable tank several times between fills will reduce the time between refills.

The biggest disadvantage of liquid oxygen systems is the oxygen will eventually warm up and evaporate even if not used. If the user was to be away for 3 or 4 weeks it is likely the liquid oxygen tank would be either empty or almost empty on their return. 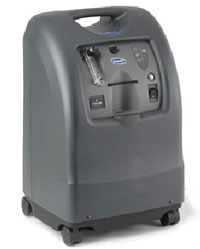 Oxygen concentrators are a less expensive option than pure oxygen from a tank because all it takes to get an oxygen flow is a power source. While using electricity to operate makes home oxygen concentrators inexpensive and popular it is also their drawback. When the power is off, so is the concentrator. Because of this a back up system of some sort is required and this is usually oxygen cylinders because they won't go empty while stored and aren't expected to be used often of for long periods.

There is also an issue with portability. People who need to go out will need some type of portable system to supply their oxygen when away from home. If they go out frequently, or for long periods of time, then the user will want to have a liquid oxygen portable system that they can refill as needed from a base tank in their home. There are battery powered portable concentrators available now for people who go out a lot but the ones I have seen have been in the $5,000 range making them too expensive for many people. 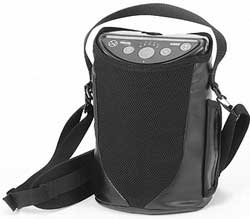 Most of these portable oxygen concentrators come with a shoulder strap and can be carried by the user. For those who would find carrying the portaable concentrator a problem, these units can also be strapped to a small cart and pulled, instead of carried.