Drive controls, for the purposes of this web site, are the controls used to actually drive a power wheelchair. The information I've provided here is a quick overview of the most common types of drive controls, and a few of the less common.

With the advances of technology these days there are always people working on new and improved ways to control a wheelchair but probably 98% of all users will be able to find something on this page that will work for them.

The average person would think that there would be nothing easier than driving a power wheelchair by pushing on a little knob in the direction they want to go. While this may be true for the "average person" there are many people who would find this difficult or even impossible because of physical limitations. Because there are so many who can't use a conventional joystick wheelchair manufacturers have devised other ways for people to drive their power wheelchairs. 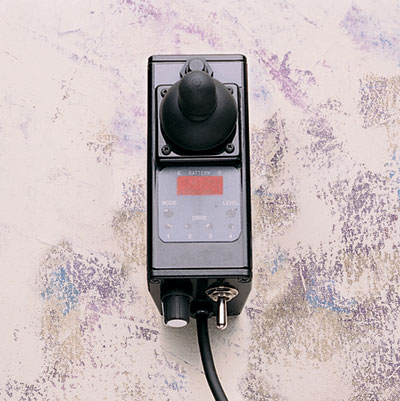 A conventional joystick generally consists of a gimbal knob an on/off switch, a speed control and a battery gauge. Depending on the level of electronics on the wheelchair there may also be program indicators, power indicator lights etc. To use a conventional joystick the user pushes the gimbal in the direction they want to go and the further they push in that direction the faster the wheelchair will move similar to a gas pedal in a car. Pictured is an Invacare PS joystick.

When controlled by the chin, the gimbal is mounted on a swingaway mount of some sort and positioned slightly below and forward of the chin. Chin controls work much the same as conventional joysticks in that the user simply pushes the gimbal the direction they want to go and control their speed by the distance they push the gimbal. The knob on the gimbal can be replaced with a small cup or other shaped piece depending on the needs of the user.

When set up to be actuated by the head, the gimbal is mounted behind the head and attached to a headrest. The user pushes the left side of the headrest to go left, the right side to go right and pushes back to go forward. In order to back up the user must activate a switch and then push the headrest straight back. The user must activate the switch again to move forward. Normally this is not a serious drawback, but if the user is in a situation where several back and forward movements are needed to get through a doorway or enter an elevator etc., it can be quite annoying.

Finger control drive systems consist of a small square box about 3" x 3" x 1 1/2" with a 2" hole in the top of it. The finger control box can be mounted just about anywhere the user can comfortably reach. To drive the chair with a finger control box, the user places one finger through the hole on the top of the box and moves the finger in the direction they want the power wheelchair to move. This system is basically the same principle as a joystick in that it's a proportional drive but instead of moving a gimbal, the user moves a finger. Pictured as an ASL finger control box.

Touch pad drives also drive the power wheelchairs with a finger and can be mounted in several places on the wheelchair depending on the ability of the user to access it. Because touch pads are also proportional, the user can determine and control the speed of the wheelchair while moving simply by a small movement of the finger. The pictured touch pad is a Switch-it. 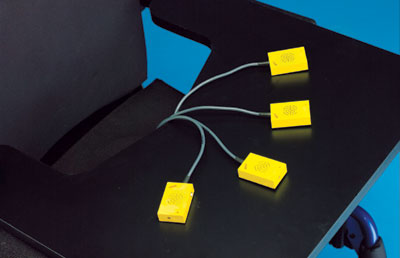 Head controls can also be non-proportional by adding proximity switches to the headrest which the user activates to go left, right and forward. As with the proportional system, the user must activate another switch to change directions from forward to reverse. The user does not have to hold constant pressure on the switches to drive the chair. The user can't actually use the headrest, as a headrest, unless power to the chair is turned off. The disadvantage of a non-proportional drive headrest systems is that there is no way for the user to adjust their speed while driving. Pictured is the ASL Digital head array.

Wafer boards are similar in operation to the non-proximity head control but are designed to be used on the user's lap or a wheelchair tray. Instead of the switches being hidden in a headrest and actuated by the user's head, the switches are mounted visibly on a board and activated by the user's hand. This digital system might be an option for a user who has some control of a hand but can't maintain the constant control needed to operate a joystick. 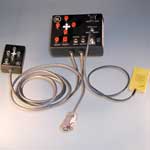 Wheelchair scanners use a display with multiple lights mounted on it to control the wheelchair. When the wheelchair is not moving the lights on the scanner blink on and off in a predictable rotation and the user activates the switch when the light desired is lit. On the scanner pictured there are four directional lights and the user activates the switch when the forward light is lit to go forward, the rear light to go backward and the side lights to turn. Once a light is chosen and activated by the user the chair will perform as commanded until the switch is hit again to cancel the movement of the power wheelchair. Pictured is the ASL Single Switch Scanner.

Sip and puff drives are the solution for those users who aren't able to use any part of their body to operate a control device on their power wheelchair. Sip and puff systems are non-proportional drives and require quite a bit of practice by the user to get good at driving. The user will either puff air into a tube or sip on the tube. Not only do the wheelchair electronics distinguish between a sip and a puff, it can also recognize the strength of the sip and puff. A hard sip or puff will mean one thing to the wheelchair and a soft sip or puff will mean something else. The trick for the user is to get used to how hard to sip or puff and be consistent with those actions. Pictured is the ASL Sip N Puff/Head Array package.