People who are confined to wheelchairs and are unable to safely transfer out of them by either standing or sliding transfers will need some sort of mechanical lift to enable their transfers. Mechanical patient floor lifts use different types of slings or strap systems to secure the patient in the lift and are either manual (hydraulic) or battery powered. Patient floor lifts consist of a sling, wheeled base, a vertical mast, a boom and a hydraulic ram.

The wheeled base is normally in a "U" shape with 4" or 5" swivel wheels and a lever which will widen the open end of the "U". Widening the open end of a "U" base makes the lift more stable and allows the person using the lift more positioning options. The larger the wheels on a patient lift base, the easier it is to move the lift with a patient suspended from it. At least two of the wheels will have brakes but these brakes are for parking the lift only. When lifting a patient the brakes should be off to allow the lift to center itself when lifting begins. Although the wheels are there to allow the lift to move a patient from one place to another, the lifts are designed only to carry a patient a few feet and not intended for log distances.

The vertical mast of the patient lift connects the base of the lift to the boom. The mast is mounted in the middle of the closed end of the "U" and has a pair of hand holds for the caregiver to use to move the lift. About two thirds of the way up the mast there will be a flange or bracket of some sort to anchor the bottom end of the hydraulic or electric ram. The top of the mast provides an anchor point for the pivot end of the boom.

The hydraulic ram has a lever about two feet long which when pumped will extend the length of the ram and push the boom's cradle end higher in the air. There are two different ways to lower a hydraulic rams depending on the manufacturer. There may be a valve at the bottom of the ram to lower the ram when opened. If this valve is not closed the ram will not pump up and lift the boom. If the ram doesn't have a obvious valve at the bottom, the valve may be a button which is depressed when the pump handle is pressed against the side of the ram. If anything can go wrong with a manual patient lift it's the ram. Eventually the seals in the hydraulic ram will need to be replaced and this is indicated by the lift slowly lowering itself when it's supporting a patient's weight. 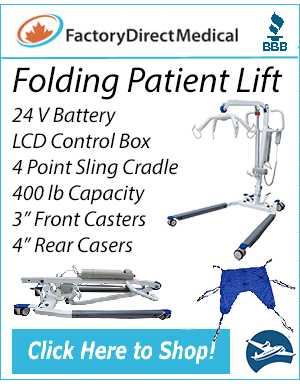