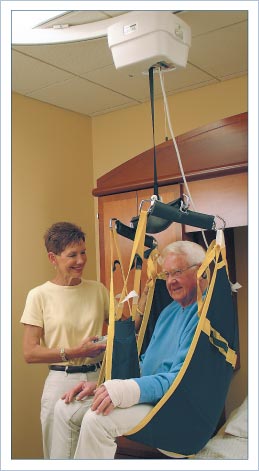 A fixed or permanent ceiling lift is one that has the hoist motor mounted on the ceiling track. The lifting strap comes out of the bottom of the shroud and has some type of cradle. The lift sling straps attach to the hooks built into the cradle.

While the fixed ceiling lift will be a little less expensive than the portable ceiling lift the cost of installing the tracking will usually put the price higher.

The biggest benefit of the permanent ceiling lift is that for some people they can be used independently. This is assuming they can manage getting into and out of the lifting sling and being able to hook the sling up to the crossbar or cradle.

The fixed ceiling lift is basically a lift motor that rolls along a ceiling track and has a pendant that hangs down that is used to control the lift. Because the unit is permanently attached to the track, the track must run throughout the house if the lift is to be used in different rooms.

Most of the fixed ceiling lifts manufacturers have models that have a second motor for propelling the lift along the track. This feature allows a user to independently lift themselves up, move to another location and lower themselves back down again. If the user is able to manage the lift sling then they can be pretty much independent as far as transfers go.

Because these lifts are battery operated they will need to be charged occasionally using a separate charger that plugs into a wall socket to power the unit. The ceiling track will have a location where the lift is parked when not in use and the charger is usually mounted at this location on the ceiling. With most models of fixed ceiling lifts, when they are parked at the charger location they will automatically recharge themselves.

The biggest drawback with the fixed ceilinglifts is that they can not be moved to another location. If the user travels to another location such as a cottage or relative's house there will have to be another complete lift system installed there.