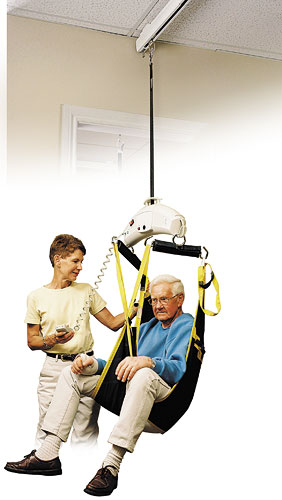 Portable ceiling lifts tend to be a little more expensive than a fixed or permanent ceiling lift but once all the needed track is installed for the fixed lift the cost will be much less and it will offer the capability of being transferred between tracks and even buildings.

People who reside in one location but often, or even occasionally, travel to other place, such as a cottage or relatives home can have the benefit of having a ceiling lift wherever they go.

Portable ceiling lifts consist of a hoist motor housed in a plastic shroud of some type to which a lifting sling can be attached. A lifting strap extends out of the top of the shroud and is hooked onto a carriage that rolls back and forth along the track on the ceiling.

Quite often the user will have several tracks installed in different parts of their home and they move with the lift from a track in one location to a track in another location. For example, the user may be transferred to their wheelchair using the ceiling lift in their bedroom, disconnect it from the track and then wheeled to the bathroom where they can hook the lift up again and transfer them to the toilet, shower chair or bath tub.

Because these lifts are battery operated they will need to be charged occasionally using a separate charger that plugs into a wall socket to power the unit. The number of lifts that can be expected from a full charge will vary with the user weight and battery age.

There are two drawbacks I can think of to the portable ceiling lift.