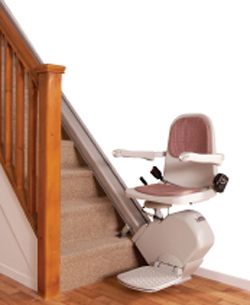 There are two basic types of configurations for stair lifts, straight and curved.

The big advantage of using two stair lifts to deal with an intermediate landing is it will often be less expensive than purchasing a single curved stair lift that will travel through the landing and negotiate the turn, if there is one.

A second advantage is they are pretty generic and the owner will usually be able to take them with them if they move. Assuming that the new staircase isn't longer than the original one. Straight stair lifts can be cut to fit shorter stairways but new tracks need to be purchased to make them longer. With the newer styles of stair adding new track should be fairly easy. The older models are difficult and expensive to add track sections to because of the close fit between the track and stair lift chair.

Stair lifts that will work on curved stairways will also work on straight stairways but are generally custom built to fit and because of this tend to be more expensive than a standard straight stair lift.

Below is a list of common options curved stair lifts can have and a brief explanation of each:

Because of the custom nature of curved stair lifts they can not normally be used in any location other than the location they are originally designed for. Even if the two stairways look identical, a fraction of an inch difference on the height or depth of the stair treads or a difference in the length or angle of the stairway will prevent its re-installation.

The information on the lifts below are provided for informational purposes only and we do not recommend or endorse any specific models. The best lift for a user or application can vary depending on the user's needs or the stairway specifics. All the information found on these pages has been gathered from manufacturer's marketing information.