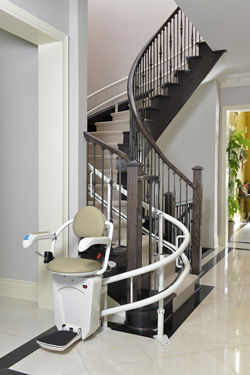 A stair lift is basically a chair that travels along and rail or track that is mounted to a stairway.

Call/Send switches are used to move the stair lift chair without anyone being on it. This is particularly helpful if two people use the lift and the lift is at the opposite end of the track when a user wants to use it. the user simply calls the lift to come to them using a call/send switch. Another use of call/send switch is to send the lift away after use. Some people don't like the look of the lift parked in the main living area of the home and will send it to the opposite end when not in use. They simply call it back when needed.

Although the design and style of stair lifts will vary between manufacturers they all have some basic components common to them all:

The information on the lifts below are provided for informational purposes only and we do not recommend or endorse any specific models. The best lift for a user or application can vary depending on the user's needs or the stairway specifics. All the information found on these pages has been gathered from manufacturer's marketing information.